Access control locks on doors have come a long way in the past 30 years or so. They contribute more than you might think to our safety and security while at work, or while spending time in public buildings such as schools, government buildings, and healthcare facilities.

There’s a lot more than meets the eye when it comes to electronic door locking hardware. Because of their importance to safety and security, we thought we’d spend some time exploring two of the most common types of access control locks in use on buildings today — electric strike locks and magnetic locks — and discuss their different features, benefits, and potential drawbacks.

If you own or manage any kind of commercial building, healthcare facility or school, this post will give you a better understanding of these two very popular locks, including some of the advantages and disadvantages of each.

First, let’s define some of the “lingo” associated with door locks

You’ll often see the terms “fail-safe” and “fail-secure” when looking at different access control systems. These are important terms to understand because they tell you how the lock will function in the event of a power failure:

It’s also important to have a basic understanding of the different parts and how they function together. Most door locks have three major components that work together to keep the door secure. They include the handle and the latch (the small metal bolt that sticks out of the side of the door when open), which together make up the lockset, and the strike. The strike, or “strike plate” is the metal plate or assembly installed on the inside of the door frame and is aligned to receive the latch and hold it secure.

Electric strikes are used in combination with another form of locking devices, such as a lock set or a panic bar. They are installed in place of the conventional lock strike plate on the inside of the door frame. Electrical power is supplied to the strike, which holds the latch or lock bolt in place, keeping the door locked until the release system is activated. 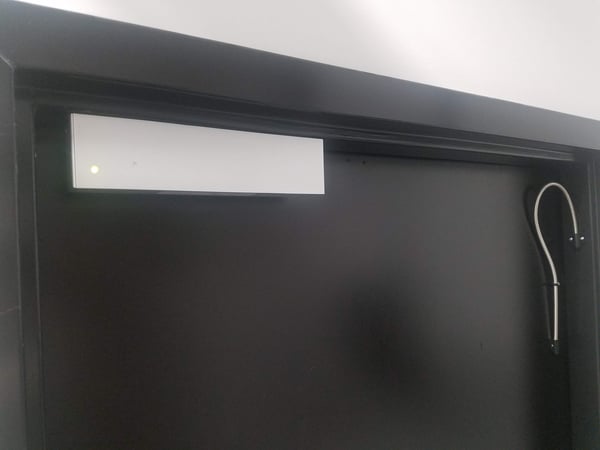 Mag locks are electromagnetic door locking devices. A mag lock consists of a large electromagnet installed along the top of a door frame and a metal plate on the door that lines up with it. The lock functions by passing an electric current through the electromagnet, creating a magnetic charge that attracts the plate and holds it in place against the door frame. This keeps the door securely locked until the power is removed or interrupted.

Examples of release systems for mag locks include many of the same devices as for electric strikes. When energized, a mag lock can create a retention force greater than 1,000 pounds, making it a very effective lock. That is, until the power is cut. Because mag locks by design require a constant supply of electricity to remain locked, mag locks are fail-safe only — they do not function to keep the door locked from either side when the power is out.

Choosing the Right Locks for Your Building

When comparing magnetic locks to electric strikes, important factors to consider include whether it will be used on an interior, exterior, or fire rated door; the purpose of the door; and the relevant life safety regulations.

Budget concerns, while also important, should be considered secondary to these. Choosing a lock based solely on cost often leads to higher costs in the end when it is discovered that the lock is not code-compliant or that it does not work for the application for which it was intended.

The following table provides a summary of some of the features of each type of lock and some of the advantages and disadvantages that you may want to consider when choosing a locking mechanism for your doors.

It is important to remember that door locks in public buildings must meet applicable regulations based on the type of door on which the lock is to be used. Most safety codes pertain to egress doors — those that provide occupants a way to escape the building in the event of an emergency. This includes a number of different types of interior doors and exterior doors.

In most cases, door hardware is required to provide for free egress at all times with hardware that is readily openable from the egress side without a key, special knowledge or effort; and depending on the code, may also require the ability to open in one action. Relevant regulations regarding means of egress can be found in:

Additional regulations regarding the use of locks on fire rated doors can be found in Chapter 6 of the NFPA 80 Standard for Fire Doors and Other Opening Protectives.

Could you use a non-corrosive, fiberglass, portable building at your operation?
May 31, 2019

THE DIFFERENCES BETWEEN ELECTRIC STRIKE LOCKS AND MAGNETIC LOCKS — WHICH ONE IS BEST FOR YOUR BUILDING?
Apr 04, 2019

Which Optical Turnstile is Right for Your Building?
Jul 03, 2017